First Thursday, then Friday, and finally the third of three BrooklynVegan SXSW day parties at Austin venue Cheer Up Charlies happened on Saturday (3/19).

Kicking things off with a bang at noon on the outside stage was Car Seat Headrest, who won us over at CMJ and keep getting better. They were a trio at CMJ but a four-piece on Saturday, and they definitely benefited from the fuller setup. These guys rock pretty hard, and their sound is familiar but in unique ways. If you can picture Julian Casablancas fronting a '90s alt-rock band, you might get an idea. They were followed by the New Paltz, NY duo Diet Cig, who seemed like they won over just about everyone watching them. Singer/guitarist Alex Luciano has an endless amount of energy, bouncing around on stage, doing high-kicks on top of the bass drum, and just constantly radiating enthusiasm. It didn't hurt that they've got a handful of catchy choruses too. Then it chilled out for Pure Bathing Culture, whose dreamy pop was the perfect vibe for the warm, breezy afternoon. The Portland, OR band sounded great and Sarah Versprille has some serious pipes. It was one of the definite highlights of the day.

The dream pop sounds continued with UK band Fear of Men, and then things got much wilder for New York queer rapper Le1f. He was a bit of an outlier on the otherwise rock lineup, but he had no trouble keeping the crowd engaged. He was followed by Julien Baker who kept the crowd very engaged. She has nothing more than her clean electric guitar and voice, and even with the generally restless (and often tipsy) crowds of SXSW, she had the place nearly silent. She treated us to plenty off last year's great debut album, Sprained Ankle, and she didn't miss one note. She was followed by Into It. Over It., who focused mostly on their fantastic new album Standards. Current drummer Josh Sparks is their not-so-secret weapon and he's a thrill to watch on stage. He's constantly all over the place but never overstuffing the songs or distracting from main member Evan Weiss' brilliant melodies. Plus, the violin-bowed guitar was a nice touch. Wrapping up the day were dystopian Detroit post-punks Protomartyr, who were as witty and raging as ever.

The inside stage began in a big way too, with Richmond singer/songwriter Lucy Dacus and her band. She only released her debut album less than a month ago, but the live show was already fully formed and she's got a heck of a voice too. Up next were Girls Names, who offered up dark post-punk with a ton of attitude and some heady atmosphere. They were followed by the DFA-signed art punks Guerilla Toss, whose freaky eccentric sounds brought us back to the early days of the Dan Deacon/Future Islands/etc scene in Baltimore. Then it was recent Saddle Creek signees Big Thief, whose sorta-folky rock sounded very fresh. Their whole band is great, and each member had a distinct, memorable presence on stage. Singer Adrianne Lenker (who also plays as a solo artist) is clearly the main appeal, but lead guitarist Buck Meek is majorly in the zone the whole time, drummer James Krivchenia has a laid-back, jammy vibe, and bassist Max Oleartchik almost seems spaced out but also totally tuned in. Up next was former Pipettes member Gwenno, who now makes arty synthpop sung entirely in Welsh that's pretty far removed from her old band but no less interesting. She seemed almost shocked that there was an audience for her stuff in America, and going by the crowd reaction she was getting, there will likely continue to be. She was followed by Japanese Breakfast, another project of Little Big League singer Michelle Zauner who are more dream pop/Fleetwood Mac-y than LBL's indie-punk. (They were a good fit the same day as Pure Bathing Culture.) They played as a trio, which included former Mitski drummer Kat Casale, and sounded super tight.

After Japanese Breakfast came what was my personal favorite set of the day, Margo Price. She's got a debut album coming out this week on Third Man (but which was streaming online by the time of our day party), and it's the most fully-realized debut I've heard all year. She hearkens back to classic mid-'60s country singers (like Loretta Lynn, who also played SXSW), but she also offers a fresh update on that sound. (It makes a lot of sense that Jack White likes this.) Her live band was terrific, looking and sounding like they've been playing together for years, but it was undoubtedly Margo's voice and lyrics that stole the show. Her powerful pipes are as precise live as they are on record, and she looks like she was born to front a band. If she's coming to your town soon, don't miss the opportunity to catch her. After Margo, the inside stage ended with Athens, GA band Mothers. Like Car Seat Headrest earlier, they're another band that instantly won us over at CMJ and they sounded just as great on Saturday. Their sound isn't unlike Angel Olsen, or Australia's Julia Jacklin (who played our Thursday party), toeing the line between folk and indie rock. And singer Kristine Leschper's voice is delicate but certainly not fragile.

If you RSVP’d, stay tuned to find out if you won the Gretsch guitar. Winner will be announced soon. 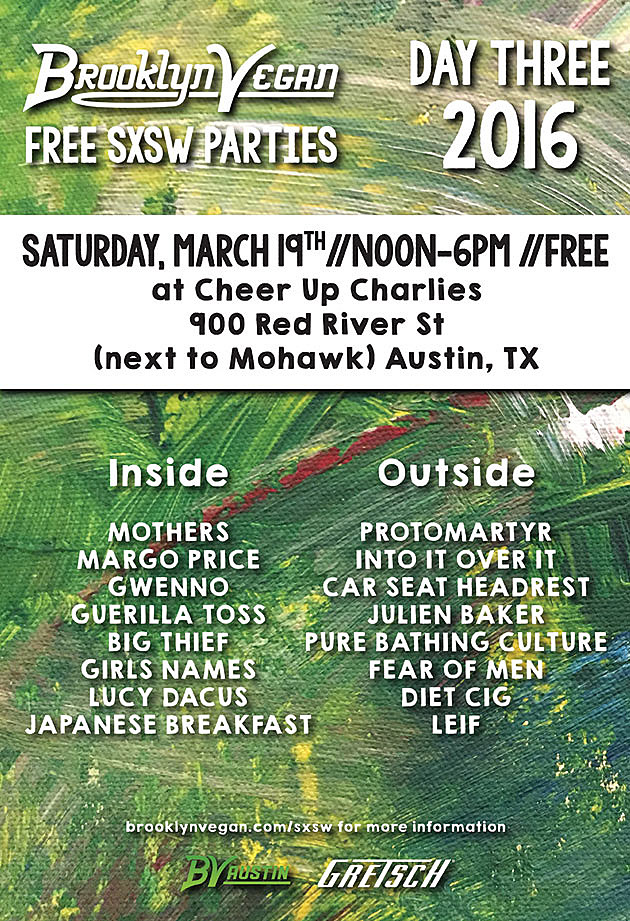 Into It. Over It.