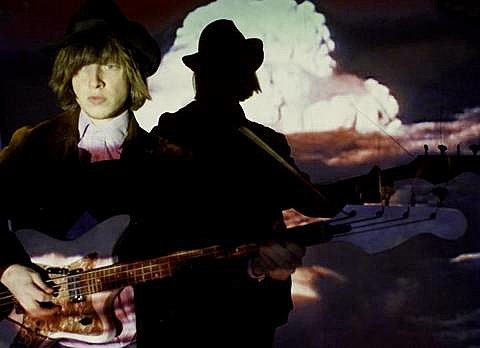 We've posted about a lot of psych-related bands today, the from the mindblowing awesomeness of Swedish weirdos Goat to the more garagey drone of Price Rupert's Drops. Here's more, though in a more baroque, Alice in Wonderland style. Dutch musician Jacco Gardner released "Where Will You Go" on 7" this year via Trouble in Mind and, with it's rolling bassline, harpsichords and mellotrons, you're swept back in time to The Zombies, Billy Nichols and Syd Barret-era Pink Floyd. You can stream it below.

Both sides of that single will appear on Jacco's debut album, Cabinet Of Curiosities, which is out in February 12 on Trouble in Mind and is pretty terrific if you have any affection of this kind of music whatsoever. You can download another track from the album, "The Ballad of Little Jane," above or stream it below. Jacco Will be visiting North America next year to come to SXSW, so let's hope he makes time for some other cities as well.

In other Trouble in Mind news, the label will release Shadows, the debut album from Los Angeles' Maston who have a similar love of baroque pop, but with a distinctly West Coast vibe. You can download "Young Hearts" above and stream it below. Shadows is also out February 12.

Meanwhile, The Paperhead, who released one of my favorite singles of the year ("Pictures of Her Demise," also on Trouble in Mind, streamable below), are on tour and will play Death by Audio on December 19 with their TiM labelmates MMOSS (whose album Only Children came out earlier this year and is streamable below). All tour dates are below.

In related news, Merge Records has signed Mikal Cronin whose Trouble in Mind debut from last year was my #5 album of 2011. He's currently touring as part of Ty Segall's band, but will release his next album on the North Carolina label sometime next year.

And finally, if you want to play catchup with some of Trouble in Mind's many great recent release, the Chicago label is offering up a 16-track sampler, Trouble In Mind's Stax​-​O​-​Trax!, that features the likes of Mikal Cronin, The Paperhead, The Liminanas, Wax Museums, MMOSS and more. You can stream it below or download the whole thing on one American dollar. That's a good deal.

Paperhead tour dates are listed below, along with various streams from all bands mentioned above.