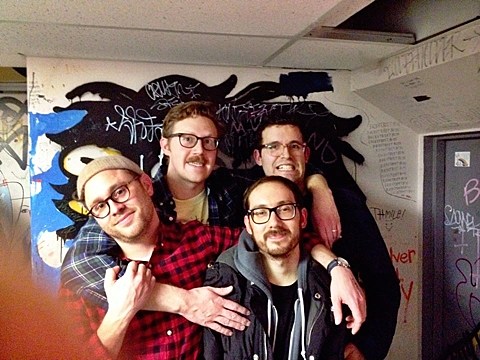 NJ's By Surprise haven't put out any new material since 2013's solid Criteria EP on Topshelf, but that's set to change this year. The band is planning to release a new album at some point, but first their new song "I Can See The Sun" will appear on the To Show That You're Still Here compilation, which comes out February 24, benefits the American Foundation for Suicide Prevention, and also features Beach Slang, Cayetana, The Hotelier, Free Cake For Every Creature and more.

Stay tuned for that comp, but in the meantime we've got the premiere of the band playing an acoustic Space Jam Session (filmed by Ally Newbold) of that song. Where Criteria saw the band taking on the jangly power pop/emo of Nothing Feels Good-era Promise Ring, this new song sees them taking on the left-of-center guitar heroics of '90s Modest Mouse and Built to Spill. The new style suits them well, as you can hear for yourself below.