By the Grace of God (not a recent pic) 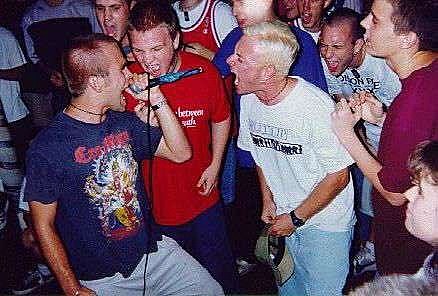 Louisville hardcore greats By the Grace of God put out two albums on Victory in the '90s, 1996's For the Love of Indie Rock and 1997's Perspective, and then recorded one final EP, Three Steps to a Better Democracy (released on local label Three Little Girls), before disbanding in 2000. They've reunited a few times since then, and they're going pretty strong right now. They've got a European tour with reunited Seattle metalcore band Trial coming up late this summer, and after that they'll play NYC.

The NYC show is with local legends Supertouch, who put out a few essential releases on Revelation in the late '80s/early '90s and last played here with Strife in 2012. Newer Philly band Pulling Punches, who are probably influenced by both other bands on the bill, open the show. It all goes down September 5 at Saint VItus. Tickets are on sale now. All BTGOG dates are listed below.

BTGOG shared members with other great Louisville bands, including Guilt, Endpoint, Elliott, Falling Forward and more. Speaking of, Falling Forward (who broke up in 1995) recently launched a Facebook and uploaded a photo of the band. That's all the news we know so far, but could a reissue or a reunion show be on the way? Falling Forward singer Chris Higdon currently fronts the band Frontier(s) and drummer Ben Lord was in Sharon Van Etten's band for a bit not long ago. Ben was also in Killowatthours and Up the Empire, the latter of which also included his future SVE bandmate and solo artist Doug Keith.

Listen to some BTGOG, Supertouch and Falling Forward, with the list of BTGOG dates, below...