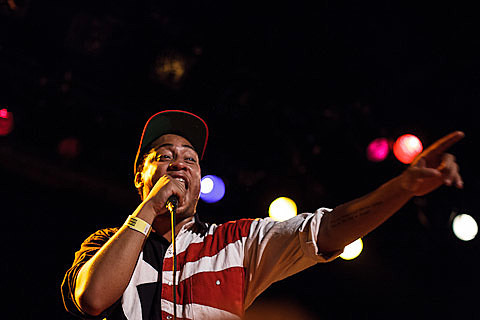 Some of you may recall that before he became known as Cadence Weapon, Rollie Pemberton spent time as a music critic, having penned a number of reviews for Pitchfork in the early '00s. So chances are he knows his way around making year end lists, and we've got his best of 2012 list right here in this post. While it includes year-end regulars Kendrick Lamar and Jermih (and fellow Canadians Mac DeMarco and TOPS), his top spot is a bit of a surprise.

Rollie's pick for #1 release of 2012 is Captured Tracks' reissues of '80s low-fi indie cult band Cleaners from Venus whose cassette-only Blow Away Your Troubles (1981), On Any Normal Monday (1982), and Midnight Cleaners (1982) saw the light of day via Captured Tracks. The vinyl sold out but you can still get them on CD and digital, and stream them via Spotify.Captured Tracks will reissue Cleaners from Venus' next three albums (1983's The Golden Autumn, 1984's Under Wartime Conditions, and 1985's Songs for a Fallow Land) plus a disc's worth of rarites in February 2013.

Meanwhile, if you haven't heard Cadence Weapon's 2012 Polaris Prize-nominated album, Hope in Dirt City, you can stream that below too. Rollie's Best of 2012 LP list is below...