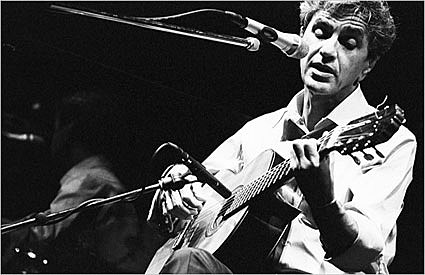 A true heavyweight, Caetano Veloso is a pop musician/poet/filmmaker/political activist whose stature in the pantheon of international pop musicians is on a par with that of Bob Dylan, Bob Marley, and Lennon/McCartney. And even the most cursory listen to his recorded output over the last few decades proves that this is no exaggeration. [All Music]

David Byrne called his 2006 album Cê "an immersion in the land of experimental indie rock". Tickets are on sale for two shows at Nokia Theatre in NYC. All tour dates below....