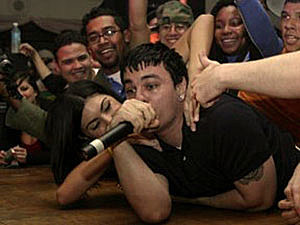 Indie hip-hop artist Cage is the latest performer to be added to the Plug Awards linuep at Webster Hall. His album Hell's Winter just got named as one of the top ten albums of the year in URB. Other announced performers at the February 2nd show are Holy F*ck & Beans, The National, and Chad VanGaalen.

VOTE in the Plug Awards. Listen to more Cage @ MySpace. Read his bio at Def Jux. It's pretty interesting.