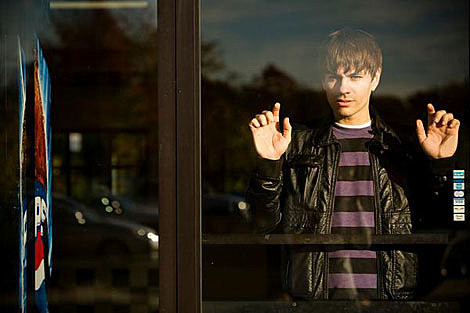 Cage announced a new LP AND a new EP, both due in the first half of 2009. First up, Chris Palko aka the artist formerly known as Cage Kennylz will drop a "seven song mega-single/EP of exclusive bonus material entitled the I Never Knew You EP" for FREE via AdultSwim/Definitive Jux. Details to come, but look for it "sometime within next two months".

Cage's new LP, his first since 2005's critically acclaimed Hell's Winter, is due on June 30th via Definitive Jux. It's called Depart From Me and is executive produced by Sean Martin, recently ex-Hatebreed who also produced 9 of 14 total tracks with the rest of the production handled by El-P, Aesop Rock, and the late great Camu Tao. Check out the El-P produced "Nothing Left To Say" available for download above.

In other Chris Palko news, Cage recently shot a video for "I Never Knew You" in LA, directed by "close personal friend" and fellow Cardboard City member Shia LaBeouf, his directorial debut. Mr Transformers and Cage are also working on a "full-length feature film based on the rapper's young life starring Labeouf":

Palko was born in Würzburg, Germany... [and] lived there until the age of four when [his father Bill] Murray was dishonorably discharged for selling and using heroin... Murray would often force Palko to pull homemade tourniquets around his arm as he injected heroin. At the age of eight, Palko's father was arrested during a standoff with state troopers after threatening his family with a shotgun. Palko was kicked out of high school, [and] began using LSD, mescaline, cannabis and alcohol...

Palko was arrested several times for drug possession and fighting in the streets. When he faced jail time for violating probation, his mother convinced the judge that he was mentally unstable, and he was sent to the Stony Lodge psychiatric hospital for a two week evaluation. He eventually ended up staying in the hospital for eighteen months, where he was a part of a small group used to test fluoxetine. After being misdiagnosed and placed on the drug, he became suicidal and made several attempts to kill himself, including hanging himself with his shoelaces and saving his lithium dose for a month before ingesting all of them at once. -[Wiki]

Yikes. And that's BEFORE he got signed by Columbia, got dropped, was one of Fondle 'Em's first artists, beefed with Eminem, dropped his debut album, joined The Weathermen, and signed with Definitive Jux.

Cage is scheduled to play SXSW at the Biz3 showcase at Club DeVille on March 20th with These Are Powers, Kid Sister, Lady Sovereign, Chin Chin, Hollywood Holt, Thunderheist, Asher Roth, and Amanda Blank. No other dates at the moment.

Cage, Chauncey, Shia LaBeouf, glue and the late Camu Tao eating breakfast, and other videos, below...

Cage-I Found My Mind in Connecticut