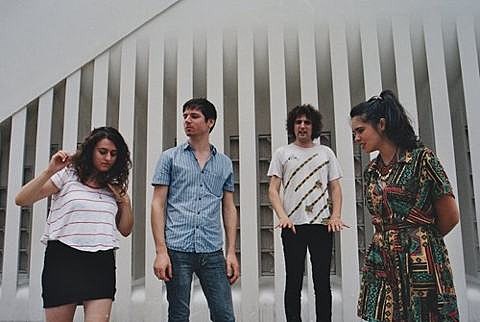 Caged Animals have released details of their new album. In the Land of Giants will be out September 3 via Lucky Number and you can stream opening track "Too Much Dark" below. And if you haven't seen the baboon-filled video for "Cindy + Me" yet, you can watch that below too.

The band have a few local shows coming up: July 18 at Mercury Lounge with Diamond Doves, Other Colors, Springs (tickets on sale); they're on the bill for the Potty Mouth show at Shea Stadium on July 25 (Shark? and TOONS too); and will play Shea Stadium again on August 17 with Crushed Out, Kissing Is A Crime, and Rosy Street.

Then in September, Caged Animals will be going out with their labelmate Darwin Deez on Darwin's previously announced tour that includes a NYC stop at Knitting Factory on September 29 (tickets).

All dates are listed, along with streams and videos, below.