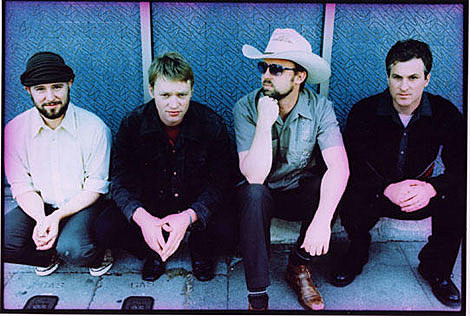 Cake, of late-'90s radio hit fame, is playing a show at NYC's Terminal 5 on Friday, May 29, as part of a short (but maybe not fully announced) spring tour. Tickets appear to be on sale now, despite the promoter's claim that they go on sale Friday (3/6) at noon. Cake played two dates at the same venue in 2007.

Cake has announced a new studio album for the summer 2009, to be released by Upbeat Records. The band will also "present an expanded and remastered reissue of Motorcade of Generosity, available in early 2009 via Upbeat." From the band's Myspace: "As-yet-untitled, CAKE's new studio album will be the first project they have undertaken since they overhauled their studio to run entirely on solar power." The band's most recent studio album was its fifth full-length, Pressure Chief, which featured single "No Phone" (video below).

Cake's interest in solar power is just one of the environmental and civic concerns documented on the band's website, which posts wisdom like "A dash of salt in coffee that has cooked or stood too long will remove the bitter taste" and instructions on how to grow watercress from urine.