Surfer Blood in Long Island in 2011 (more by Greg Cristman) 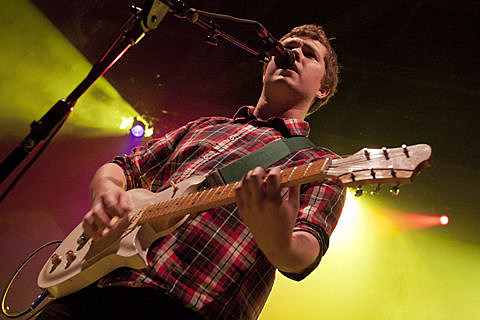 As mentioned L.E.S. rock club Cake Shop is going through some tough financial times and have started a PledgeMusic campaign to raise money to stay alive. There's seven days left on that campaign and the venue is 63% of the way there. If they don't reach their target, they won't get any of the money raised, so show your support -- we need Cake Shop around!

Meanwhile, Cake Shop has had some benefit shows like the one earlier this month where Clap Your Hands Say Yeah were the secret headliner.

The venue is throwing another benefit show this Thursday (7/19) with Grand Rapids, Shark? and a headliner listed as "extra secretly special band (bring yr wakeboard and some band aids!)." Hmm. $12 - 20 sliding scale cover.

In other news, Surfer Blood opens for Death Cab at Wellmont Theatre that night (7/19) (sold out) and also plays with Grand Rapids at Maxwell's on July 23 (tickets).

And in more related news, Death Cab frontman Ben Gibbard will release his debut solo album, Former Lives, on October 16 via Barsuk in the US and a day earlier in Europe via City Slang. The album was recorded at Aaron Espinoza's (Earlimart) studio, The Ship. Some tour dates in support of the release are TBA.