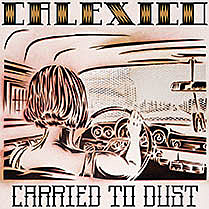 Webster Hall is coming back in style. First two Okkervil River shows, and now one for Calexico on September 24th. The NYC show is part of a tour in support of a new record....

Two years after Garden Ruin, Calexico has returned and is offering up Carried To Dust, the new full-length record due September 9, 2008.

For Carried To Dust, Calexico co-founders Joey Burns and John Convertino called on a rotating cast of musicians and friends to help them create what is arguably their most varied and strongest work to date. The band lineup that solidified around Feast of Wire is back again, along with a number of guests, including Sam Beam, Douglas McCombs, and Pieta Brown.

A Ticketmaster presale for the Webster Hall show starts today at 10am. (password?). Regular sale starts Friday at noon. All Calexico tour dates, and the new album tracklist, below....