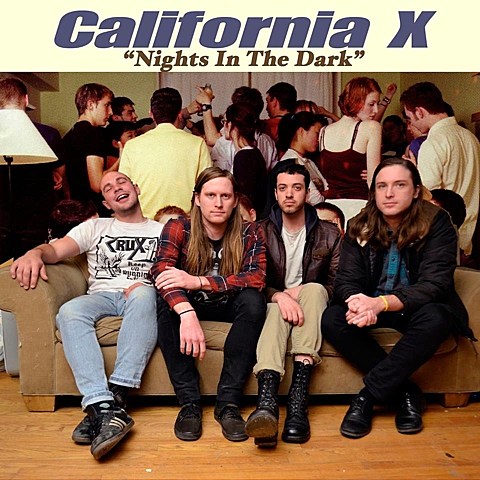 Massachusetts sludge punks California X just released their sophomore album, Nights In The Dark, and are playing a few shows out in support of it. The Saves the Day-referencing artwork above isn't the actual artwork by the way, but it is awesome. (And speaking of, the girl on that cover was just interviewed.) Listen to the album below.

The band have shows coming up, including NYC at Saint Vitus on March 6 with support from Ovlov, IYEZ and Darkwing. Tickets for that show are on sale now. All dates are listed below.

California X were just in town to headline the second Don Giovanni showcase at Knitting Factory, and the third and final night of the label's showcases is coming up. They take the space back over on February 28 for a double-header night serving as the album release shows for Screaming Females' excellent new album, Rose Mountain, and feature Priests, (who just played Indie Pop Prom 3 this weekend) Tenement and Vacation as support. Both the early and the late shows are now sold out.

Rose Mountain is streaming over at NPR now in advance of the album's February 24 release date. It's Screaming Females' sixth full-length, and the consistently great punks are making music that's tighter than ever.

All of California X's upcoming dates and a stream of Nights In The Dark below...