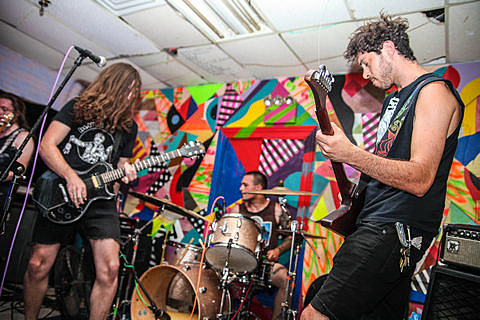 Photo: California X at DbA in 2013 (more by Vadislav Grach)

Amherst, MA's noisy sludge-punks California X will release their sophomore LP, Nights In The Dark, January 13 on Don Giovanni Records. You may have already heard the album's title track, and they've now shared a second song, "Hadley, MA," which you can stream below.

Before the album drops, the band will head out on tour, kicking off in NYC with a release show on January 2 at Shea Stadium with the similarly sludgy Ovlov, stellar post-hardcore shredders Big Ups and the homespun riffs of LVL UP. Tickets for that show are on sale now.

California X closes out their current string of dates with an appearance at night 2 of the Don Giovanni showcases which happens at Knitting Factory on February 7. You can pick up tickets for that show (and all three nights) now. The band also contributed to DG's list of 2014 favorites highlighting LVL UP's album Hoodwink'd as well as the Ovlov / Krill/ LVL UP/ Radiator Hospital split.

All of California X's upcoming dates are listed, along with the"Hadley, MA" stream, below...