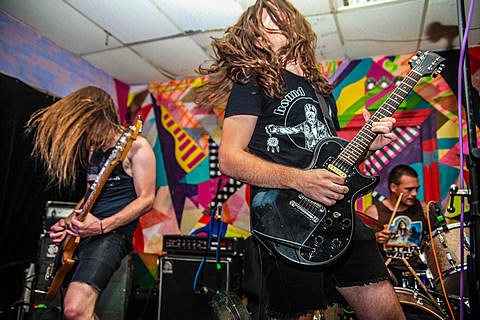 Poppy Amherst, MA sludge-punks California X are heading out on tour in a couple days. They'll play a NJ show in New Brunswick at Paradise Lost on August 31 with Brick Mower, Casual and Osaka. Then they'll play NYC at Death By Audio on September 6 with Slothrust and Mannequin Pussy. Tickets for both those shows are available at the door. No word yet on new music for the Don Giovanni-signed band, but hopefully some of that will be coming along as it feels like its been awhile since we got their excellent self-titled debut. All tour dates listed below.

Mannequin Pussy also have other dates, including their previously discussed show with Little Big League, Ovlov and Krill on September 3 at Shea Stadium. They also recently released another "new" song from the re-release of their debut album which is coming this September on Tiny Engines. You can stream that, with their list of dates and Cali X's dates, below...