Callers at BAM in May (more by David Andrako) 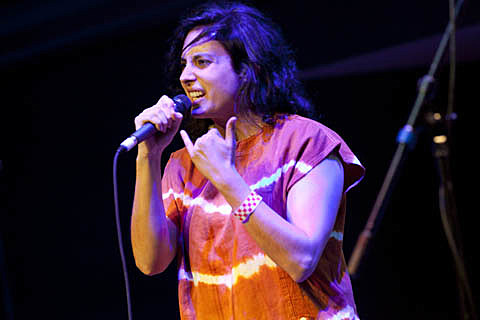 Brooklyn's Callers, who just played Union Pool last week (how was that?) recently signed to Partisan Records and will put out their new album, Reviver, on the label on October 9. The new single, "Howard 2 Hands," which you can stream below, sees them drifting even further from the folk-leaning sounds of their debut towards the pop direction they began toying with on 2010's Life of Love.

Callers have been added as an opener to fellow boy/girl duo Wye Oak's recently expanded tour, which was just expanded even further. After hitting NYC for the the previously discussed Music Hall of Williamsburg (9/20) show, the two bands will play another NYC area show at Maxwell's the next day (9/21). Tickets for both the MHOW show and the Maxwell's show are available.

A list of updated dates and that song stream are below.