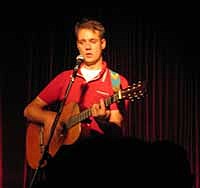 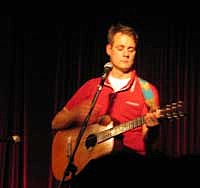 Calvin Johnson played to a packed house at the Sidewalk Cafe last night. The former Beat Happening front man and K Records founder took the stage a little after midnight. He started off by introducing himself to the crowd and telling one of his many amusing stories. He said that the Lower East Side resents Hoboken, because at one point in time, Hoboken was the “New” Lower East Side. Which lead him to add, “Some say Brooklyn is the “New” Hoboken.” He would continue to rant all night.

He played some songs off his new album, he sang , “Lightnin' Rod For Jesus,” and he played a couple of cover songs by older artists, including Dusty Springfield's, "If wishes were kisses." None of his old work really. He played with guitar and he played without it, leaving the crowd to focus on his voice. It was a very intimate evening and the crowd was silent throughout the hour long set.

I’ve never seen Calvin live , nor have I read a review of a show, so I didn’t know what to expect. The overall feeling of the show was very relaxed. He was animated at times and also very subdued at others. He was at his best though when he was telling his last story of the night. It was about how he came to New York when he was 16 years old, to visit a friend in SoHo. His friend took him to see Gang of Four, Sick Boys and his highlight, The Cramps. He saw The Cramps three times in a 24 hour period at Irving Plaza and said that those shows, “Changed everything and from there on out I never looked back. And for that I say thank you. Thank You New York.” He then went into his final song of the night.