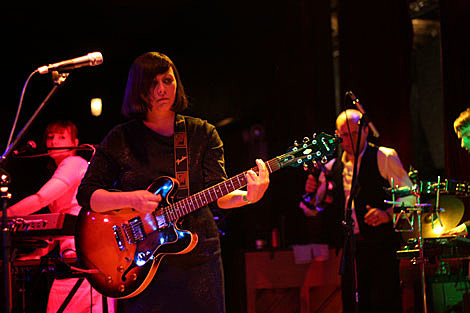 Camera Obscura played the Bell House in Brooklyn last night, March 24th (check out the set list below). The band stays in NYC today for a show at the Mercury Lounge tonight (3/25).

Camera Obscura next head to the UK and Ireland for a series of shows in April, and then the band returns for a May/June North America tour. That includes a Wednesday, June 24th Webster Hall show in NY. Tickets go on Am Ex presale today/Wedneday at noon, and regular sale Friday.

The Scots are coming off of an Austin/SXSW stint that included a performance at the Central Presbyterian Church)...

The good news/bad news is the songs from the forthcoming album on new label 4AD sound just like the songs from the last album, "French Navy" being the best of the bunch. Tracyanne was as fragile and adorable in real life as she sounds on record, at one point commenting on the "fuckers" who were walking out of the church early. The crowd was one of the more eclectic-looking of the night. [Houston Press]

Also coming up - on April 21st, the band is releasing new record My Maudlin Career on 4AD. The label just posted a new video for album opener and "best of the bunch" song "French Navy" - watch it below.

The Bell House set list, all upcoming tour dates, and above-mentioned video, below...

Mar. 24th, 2009, Camera Obscura @ Bell House set list (via wembley, who also wrote "it was awesome. webster hall in june yall"):
My Maudlin Career
Swans
Come Back, Margret
Let's Get Out of this Country
You Told a lie
Forest and Sands
French Navy
Tears for Affairs
James
Honey in the sun
The Sweetest Thing
Lloyd I'm Ready to Be Heartbroken
If Looks Could Kill
--
Teenager
Razzle Dazzle Rose