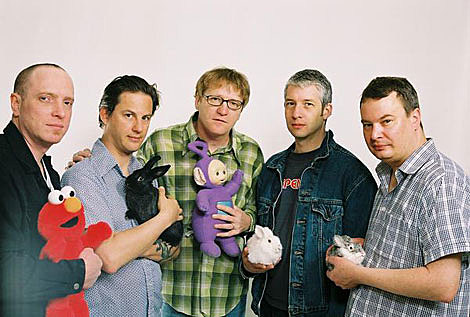 Currently celebrating their 25th anniversary, Camper Van Beethoven are playing Friday (1/9) (tickets) and Saturday (1/10) (tickets) at Bowery Ballroom in NYC - the band's first shows here since 2006 (thx anon). They also played some shows in 2004 when they released New Roman Times, their first album of original material in 15 years.

Camper Van Beethoven were one of the few bands of the '80s loved by both punks and hippies, taking the f-you attitude of the former and the laid-back vibe of the latter, mixing it with various forms of ethic music plus their own Santa Cruz style and humor. Whether punks and hippies ever acknowledged each other's presence at shows back then is a different story. (It took me till the late-90s to admit that "Good Guys and Bad Guys" sounds a lot like The Dead.) While best-known now for their their early single "Take the Skinheads Bowling," CVB were also capable of thoughtful, insightful, and moving songs as well. Time has been kind to them, actually, and records like their 1985 debut, Telephone Free Landslide Victory, 1986's eponymous third album, and the finale of CVB's initial run, 1989's Key Lime Pie have held up more than a lot of other records from the same era. And New Roman Times was a fine addition to their discography, almost like they never went away.

If you're a big CVB fan, you might want to consider hitting both shows. The band's 2-night stint in Chicago back in November saw sets of around 25 songs, with only 9-10 of them being duplicated both nights. I last saw them was at a 2-hour plus, sweltering show (literally) at Knitting Factory in July 2002. It's almost all of the original lineup and, if anything, the band have gotten better as musicians since.

Additionally, Krummenacher and Segel are both doing solo sets at Pianos on Sunday (1/11) - a bill that also includes local fave Sharon Von Etten. I wouldn't be surprised if other members of Camper make appearances. Segel also plays in Noodle Shop at Le Poisson Rougue on Wednesday (1/14).

But wait there's more. Monks of Doom, which is basically Camper Van Beethoven minus frontman David Lowery plus David Immergluck (who has played in Counting Crows but spent the '80s in the bizarre theatrical band The Ophelias), are playing Europa in Greenpoint on March 12 and 13. Tickets are on sale. Lowery, meanwhile, continues to play in Cracker too. These guys stay busy.

A few classic CVB videos, and all dates, after the jump...

"The Eye of Fatima"