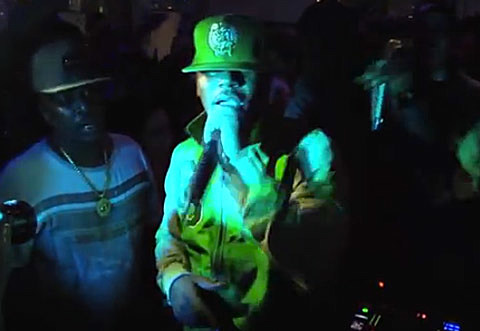 The Harlem MC and king of nonsensical rhymes this side of Kool Keith, Cam'ron, made an appearance at a recent Kenny Dope/Solange DJ set at the Boiler Room party in the W Hotel in Times Square on April 25. The Dipset MC blessed the cowd with snippets from his classic "Hey Ma" and the Diplomats favorite "I Really Mean It." Video from his performance is below. If you missed the show, make sure and head to SOB's on May 30 to catch him, tickets are on sale.

Though the SOB's show doesn't feature any fellow Dipset members, another favorite hip hop crew have announced their return to the stage. The Lox (Jadakiss, Styles P and Sheek Louch) will celebrate their anniversary at BB Kings on June 17, snagging support from Funkmaster Flex. Tickets are on sale. Speaking of anniversaries and Jadakiss, look for J-A-to the mwah to play the Doo Wop anniversary party next week.

In other hip hop news, just two days after Cam'ron blesses SOB's, look for Chief Keef to headline the much larger space at Best Buy Theater on June 1. Tickets go on sale tomorrow (May 3) at noon.