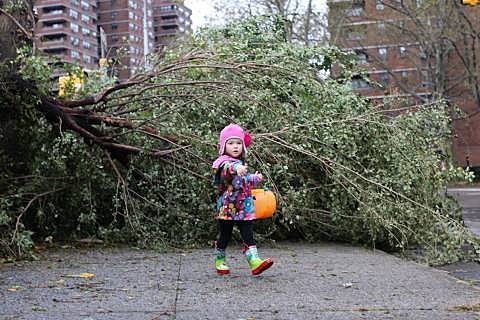 We just posted the many NYC cancellations for tonight/Halloween (though more shows are still happening tonight than previous nights), and there's already a few cancellations being announced for Thursday (11/1).

The Meat Loaf show at Beacon Theatre, which was supposed to happen on Thursday has been postponed to a later date. An announcement on the new date is forthcoming.

Woodkid was forced to cancel his dates in NYC, San Francisco, and LA due to the hurricane and its effect on major airports. The NYC show was supposed to happen Thursday (11/1) at Irving Plaza and will be rescheduled to a TBA date. Tickets are refundable at the reseller.

As mentioned, the ESG show at Bowery Electric with Sinkane has been postponed to a later date TBD in December/January. The Voluptuous Horror of Karen Black show that was moved to Thursday from Tuesday (10/30) has been cancelled.

As mentioned, all Dita Von Teese shows have been cancelled.

The Squarepusher, Bonobo (DJ), Holy Fuck, and Mount Kimbie show at Terminal 5 is still on, and there will be drink specials before Squarepusher's headlining set. Squarepusher just played Moogfest in Asheville over the weekend, but had to cancel other dates on the tour after that, including his show in Silver Spring, MD on Monday (10/29) and his Boston show tonight (10/31).

The Freelance Whales show at Webster Hall is still on too, but with recent reports from ConEd about the power situation in lower Manhattan, it wouldn't be surprising if that show gets cancelled. UPDATE: Yep, postponed.

UPDATE: Todd Barry's show at the Bell House is postponed.

The Darcys were supposed to play Mercury Lounge on Thursday (11/1) with Rey Pila but it has been postponed to November 6.

The Tom Tom Club show at Brooklyn Bowl is still on as of this post (and looking good considering the Big Freedia Halloween show is going on as scheduled).

The Chris Gethard Show is presenting a show on Thursday at Littlefield called "Come Take A Ride With The Weirdest Bands We Know" that features Big Digits, Stumblebum Brass Band, Naked Heroes and Mindtroll. Tickets for that show are on sale now.

Social Distortion were forced to cancel their show at The Chance in Poughkeepsie on Sunday (10/28), but their shows at Starland Ballroom on Thursday and Friday are still on for now

We're still keeping tabs on the status of Santos Party House and we'll let you know when we have more info. As of now, the show is still on with Wolf Gang, Alex Metric, The Royal Concept, and Atlas Genius. They tweeted "We're still sorting things out, cross your fingers and stay posted." Tickets are on sale.

Over at Carnegie Hall, the performance by the Orchestra of St. Luke's with conductor Nicholas McGegan that was to be in Stern Auditorium / Perelman Stage, has been rescheduled for Saturday, June 1 with soloist to be announced. And the performance by pianist Wael Farouk, that was to happen in Weill Recital Hall, has been rescheduled for Saturday, June 1. Tickets for both November 1 performances will be honored at their new date.