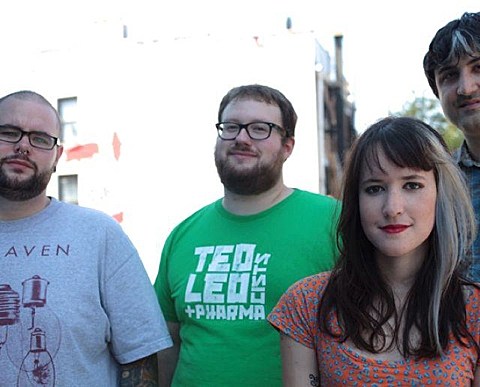 We've seen lots of bands lately that cross over between punk (or pop punk) and indie scenes, and Brooklyn's Candy Hearts is one of those with a crossover audience. Their most recent release, The Best Ways to Disappear EP, came out last year via Bridge 9 Records and Violently Happy Records, and they have a full length in the works for this year. The EP is six tracks of charming lyrical pop punk that's sugary and clean around the edges, but frontwoman Mariel Loveland has attitude and is a very human songwriter. You can stream one of those tracks, "Bad Idea," at the bottom of this post.

Candy Hearts last played NYC in December when they were on tour with New Found Glory (whose guitarist Chad Gilbert produced the Candy Hearts EP and runs Violently Happy Records) but if seeing them with NFG isn't your thing, you might rather catch them at a small, sweaty show with other local DIY punk bands. They'll do just that when they headline a Hurricane Sandy benefit in Brooklyn on January 26 at The Grand Victory (245 Grand St) with Banquets, Model Home, Up For Nothing, and Sad and French. Tickets for that show are on sale now.

Candy Hearts recently filmed a live acoustic video of "Miles & Interstates" for Property of Zack. You can watch that video and stream "Bad Idea" below...