Cannabis Corpse at Bowery Electric in 2010 (more by Suren Karapetyan) 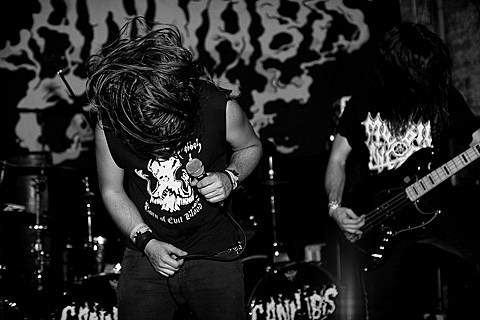 Richmond, Virginia death metal and weed-pun purveyors Cannabis Corpse are going on another US tour in November/December with Texas thrash crew Mammoth Grinder. Bassist and studio-mastermind Phil "Landphil" Hall apparently never sleeps, as this comes on the heels of a new Iron Reagan album and an ongoing tour for that band. Not to mention his now-legendary neo-crossover band Municipal Waste recently hit the road as well. Mammoth Grinder are no slouches themselves, as they spent the summer touring with Power Trip, with whom they share a member.

The tour is in support of Cannabis Corpse's excellent full-length From Wisdom to Baked which came out earlier this year, and it will stop in NYC for a show at Saint Vitus on December 19. Tickets for that show are not yet on sale, but they should be up soon via Ticketfly.

All dates listed, along with a stream of From Wisdom to Baked standout "With Their Hash He Will Create," below...