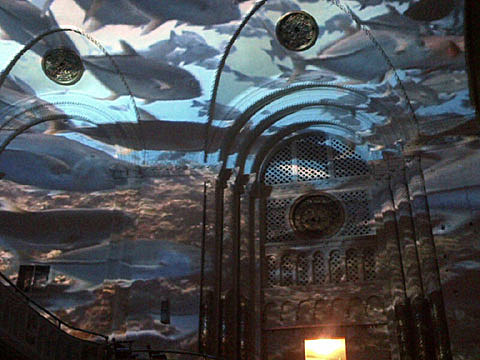 As mentioned, the historic Capitol Theater, which is located in Port Chester, NY and has been home to the Rolling Stones, Janis Joplin, the Grateful Dead, Pink Floyd, David Bowie and more, is making its return and will be booked/operated by Brooklyn Bowl owner Peter Shapiro, in partnership with Bowery Presents. Shapiro tells us he is "very excited" at how the renovations are going and as revealed in a video which you can watch below, the theater is set to open this September. Stay tuned for the initial lineup announcement.

Peter is working with longtime Pink Floyd lighting designer Marc Brickman on the theater's lighting design and NYC Production House Batwin & Robin is consulting on projections, that will be able to project on to the theater's ceiling during shows, which you can see a test shot of in the picture above (check out a larger version of the trippy scene HERE).

The Cap Is Back from Capitol Theatre on Vimeo.