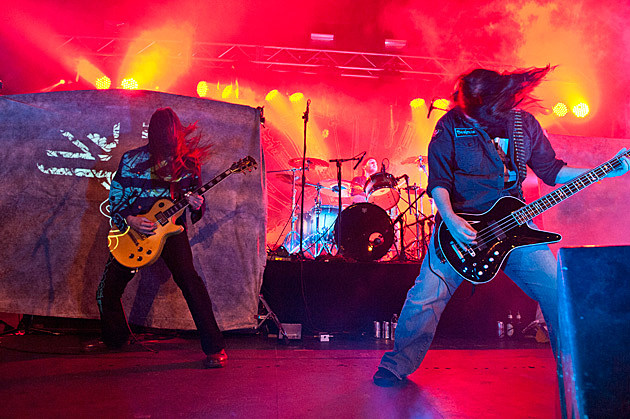 Carcass's new album, Surgical Steel, is arguably the metal event of the year. Few bands are so revered and influential; even fewer can claim to have produced such a rock-solid comeback album after nearly two decades on ice. Surgical Steel finally came out on Tuesday; you can purchase it here and stream it via Spotify or Rdio.

Over at Invisible Oranges, we celebrated Surgical Steel's release by interviewing Carcass bassist/vocalist Jeff Walker, who is evidently unsurprised by the high praise his work is receiving:

"I don't feel like people should be too surprised. We're not stupid. We went into the rehearsal room and the studio well aware that people would have been quick to put the boot in if we didn't deliver, you know? And at the same time we don't want to shit on the Carcass legacy. So it's not a cash cow. We went in using our own money. So if we weren't confident that we could deliver on that, we wouldn't have bothered. We weren't going to gamble all that money away. I think it's quite simple to do what we did. It's a lot easier to return after 17 years than to continue for 17 years and record another album. We have a lot to prove, don't we? And it's easier when you're hungry as a band. It's easier to make your first album than your second or your third."

Carcass's upcoming North American tour has two NYC stops: Saint Vitus on 9/25 and Gramercy on 9/26, both with New York death metal legends Immolation. Unfortunately, both are sold out, BUT: if you listen in to Invisible Oranges's East Village Radio show this coming Tuesday (9/24) from 10pm-12am, you'll have a chance to win a pair of tickets to the Gramercy gig.

Check out the complete list of upcoming Carcass tour dates (including some European gigs) and a streaming track below.