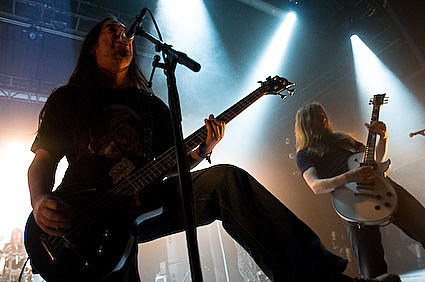 A new interview in Decibel spills the beans.... Carcass are officially back in action. The band, who reunited four years ago, have recorded new material and expects to release a new LP in 2013.

Jeff Walker: "Bill Steer (guitars), Jeff Walker (bass/vocals), Daniel Wilding (drums). For live we'll obviously add another guitarist--we have someone in mind but we are not interested in a 'name' player."

Why do this now over four years after the initial Carcass reunion?

"Good timing, eh? Twenty-five years we first recorded Reek of Putrefaction. The incentive was off Bill. I'd verbally expressed an interest in doing something but I needed Bill to have the desire and hunger again and that's exactly what has happened. He recalled watching Dan Wilding play on tour with us in 2008 and something about him struck a chord and he wanted to work with him. There was something about him that kind of reminded him of Ken, on a personal level as much as his playing. We've done this recording firstly for ourselves--there's no label backing even as you read this--in fact me and Bill have spent a small fortune out of our pocket to see this through--it's more of an artistic/personal statement than anything." - [Decibel]

So far Carcass has one US date in their sights... at Maryland Deathfest 2013. Will that change soon?