by Black Bubblegum (who is back from vacation) 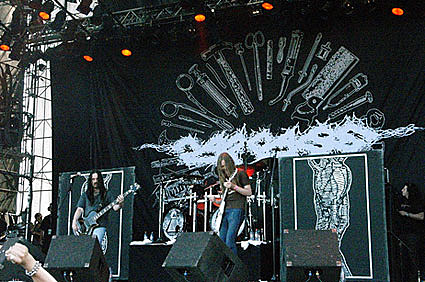 Legendary grind/death band Carcass who recently reunited in Europe will play Nokia Theater in NYC on September 6th!!! Blabbermouth is reporting that tickets will go on sale Thursday June 26th.

NY death metal badasses Suffocation will open up (!!) and supposedly more shows will also be added to the US! Exclamation point!

UPDATE: We are being told that Necropagist and Aborted are opening, but not Suffocation. Either that, or Suffocation can't be announced yet. We can't say for sure, but we can say that Suffocation is playing BB King's in NYC on July 13th.

Original Carcass drummer Ken Owen, who suffered a brain hemorhage and fell into a coma, MAY make brief appearances during their tour, but the official Carcass reunion lineup is as follows:

Carcass's first reunion appearance was June 6th @ The Sweden Rock Festival, and their setlist looked something like this:

In related news, MVD is clearing out Earache's video vault, including their latest DVD, Immortalised - Earache Records 1986 - 2000. Included is "Heartwork" by Carcass, as well as killer old vids by Bolt Thrower, Sleep, At The Gates, Brutal Truth, Napalm Death, and many others (DAMN, their lineup was killer). Pick up the DVD here.