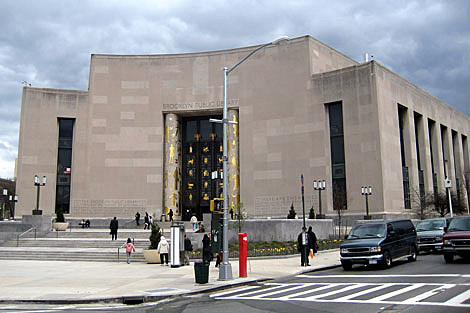 "Finally, the Care Bears on Fire are not just for kids anymore.

The Park Slope-based trio -- newly reconfigured as an all-girl band -- [played] its highest-profile gig ever: a Saturday night, all-ages, leave-the-stuffed-animals-at-home show at the Bell House [happened in January].

But first, a little unfinished business.

Guitarist Lucio (no last names, please -- they're all barely teenagers!) left the band last year and has been replaced by Jena, a Manhattanite who, at 14, is the oldest Bear ever. She'll play bass.

What happened to Lucio?

"We had creative differences and he went in a different direction," said Izzy, 13, in an exclusive sit-down with GO Brooklyn over lattes and muffins at the Cocoa Bar in Park Slope." [The Brooklyn Paper]

Care Bears on Fire, who were also recently interviewed by Amy Poehler for On Networks show "Smart Girls at the Party", will play a free show to kick-off the Brooklyn Public Library's summer reading series on Thursday, June 4th. The gig will be held outdoors at the Brooklyn Library's Central Branch (1 Grand Army Plaza). Two days later, the same space will host singer Katia Cadet.

The Amy Poehler video and more info on both shows, below...

SUMMER READING KICKOFF Sophie, Izzy and Jena of Care Bears on Fire are punk meets garage, straight out of a Brooklyn basement. The young band has become a favorite on the New York City club scene, winning over audiences with their authentic punk spirit and songs that capture the experience of being a kid with attitude and humor. As the song chorus goes: "nanananananana, I don't want to be like everybody else!," it's become quite clear, Care Bears on Fire aren't like everybody else. They're the real deal!

Katia Cadet, also known as Baby Kat, is a singer and aprolific songwriter and a vocal producer. haitian-born Cadet delivers Zouk Soul and R&B in French, English and creole. She earned a Grammy nomination for her song 911, which Mary J. Blige recorded. She has also written songs for Wyclef Jean. Her jazz tune "L'amour Une Aventure" was featured in Rush Hour 3.