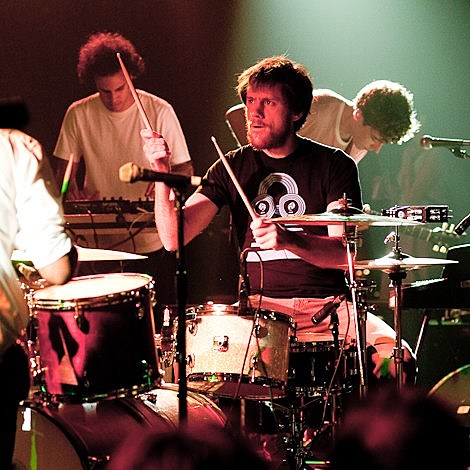 You may remember that Caribou toured as the Caribou Vibration Ensemble back in 2009 which featured Marshall Allen of the Sun Ra Arkestra, Four Tet's Kieran Hebden, Enon/Braniac's John Schmersal, Sinkane's Ahmed Gallab and more. CVE released a live album in 2010 and have now released a second, this time coming from two shows in December 2011 in Belgium and London with a slightly different lineup of the Ensemble, most notably minus minus Allen. You can stream that in full below and they'll have vinyl copies on tour this spring.

Meanwhile, there's also a live video of Caribou Vibration Ensemble from their ATP UK performance in 2011 that does feature Marshall Allen and the other folks on the live LP (ATP UK was just a few days later). That video was shot and directed by Savages drummer Fay Milton and you can watch that below as well.

As you may know Milton and the rest of Savages are in NYC this month for a nine-show club residency. Marshall Allen, meanwhile, will be here with Sun Ra Arkestra for a free show at the Seaport's inflatable venue Sugarcube on January 31.

Video and live album stream below...