I'm sorry for the long silence. I've been busy making music for a new Caribou album which I'm really excited about. I've just added some summer festivals and DJ sets to our Live Dates. Hope to see you there!

In addition, for the ATP show only, we will be joined by MARSHALL ALLEN, Sun Ra Arkestra leader and Arkestra member for over 50 years! At both shows we will be playing new and old Caribou songs reworked to make the most of this special line-up.

Also I've just done a remix of Cortney Tidwell's track 'Watusii' under the name Daphni. It's out on City Slang shortly.

Finally, Andy Lloyd who has played bass with us these last couple years is unfortunately not going to be playing with us in the future (apart from the Caribou Vibration Ensemble shows) as he's now touring with our friends Born Ruffians [who just finished touring with Franz Ferdinand]. Andy is a dear friend and a great musician and will be sorely missed but we are very lucky that John Schmersal (Enon, Brainiac) will be joining Caribou and playing bass and singing with us from now on - starting with the upcoming shows this summer.

I think that's it for now. As always, apologies to everyone whose emails I have taken an eternity to reply to. Hope to see you at a show,

Snaith's last full-length, Andorra, came out in 2007 on Merge. The album won the 2008 Polaris Music Prize for best Canadian album of the year.

ATP NY in September is currently Caribou's only NY-area date. The band is playing on the fest's Sunday lineup, which (as pointed out above) is being curated and headlined by the Flaming Lips. 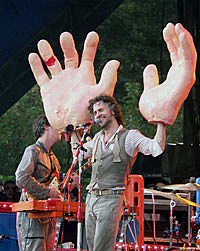 The Flaming Lips recently received an accolade from the people of their homestate, Oklahoma, who voted the band's "Do You Realize?" as their official rock song. After a resolution to recognize the song faltered in the state's House of Representatives, the honor was enacted by executive order from the state's governor on April 28th (declared "Flaming Lips Day").

EW: you won in the end. What was the official ceremony on Tuesday like?

Wayne Coyne: It was cool, uncomfortable, weird. All the things that you think talking to governors would be. I mean, he's a very cool guy. But it is another world for me. And he declared it Flaming Lips day as part of the ceremony, which we didn't know was going to happen.

EW: Did any special privileges come with that? Were you allowed to molest a goat or something?

Wayne Coyne: I asked the governor while we there: "Can I just go to a restaurant and get a meal for free?" I don't think anyone really had an answer. I didn't suggest molesting a goat.

Not long before that, FL front-man Wayne Coyne made news by criticizing the Arcade Fire, saying, "They really treat people like shit," among other things. Win Butler responded online, and Coyne has since apologized, saying, "I didn't necessarily mean it about the people in the Arcade Fire. I meant it about the guys that were running their stages at a couple of festivals."

With that under the bridge, the Flaming Lips have announced their follow-up to 2006's At War With the Mystics will be a double LP tentatively titled Embryonic, which the band expects to finish recording this summer and release in September.

The Flaming Lips are playing the Pitchfork Festival on Sunday, July 19th. Even though that's not the fest's "Set Lists by Request" night, it turns out the Flaming Lips will be will be following the format for at least part of their set anyway.

A video of the Flaming Lips accepting their "Official State Rock Song" honor and all Caribou tour dates below...