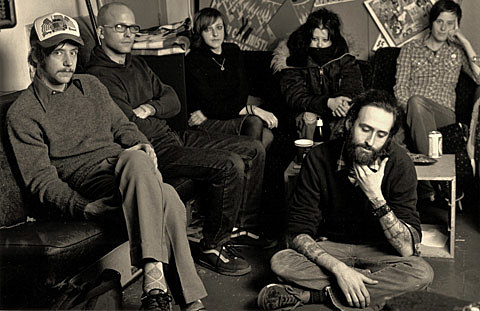 Carissa's Wierd are reuniting again for a pair of shows in celebration of the new Tucson 7" out now on Hardly Art! The 7" is the band's first new material in over seven years. Listen to half of it, "Meredith & Iris", below.

Carissa's Wierd may be unjustly known as the springboard for Band of Horses and eventually Grand Archives. Benjamin Bridwell and Mat Brooke were both members of the Northwestern crew before their 2003 dissolution, though note that Bridwell is not part of the reunion. Everyone else is.

The live dates are 9/24 at Neumo's in Seattle and 10/10 at NYU's Eisner & Lubin Auditorium in NYC, and the NYC show WILL be open to the general public -- $4 with NYU ID, $8 non-NYU, sold day of show at the NYU ticket central box office. Very exciting news.

Coincidentally (?), Band of Horses lead guitarist Tyler Ramsey is playing NYC the same night, October 10th, at Joe's Pub. Tickets are on sale for that. His show is part of an October tour in support of his new album The Valley Wind. You can see all dates and stream the title track below.

Stream the Carissa's Wierd track too, and check out the video of Band of Horses performing "Infinite Arms" on Conan O'Brien last week, with all dates below...

--
The Valley Wind by tylerramsey