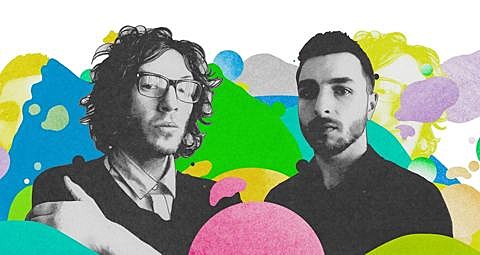 Casimer Pascal, who fronted the Detroit-based pop band PAS/CAL until 2008, has been sporadically releasing tunes with his nephew Vincent Joseph Casimir Caruso under the name Casimer & Casimir for a few years now. The band's first official single just came out though, "O Sweet Joe Pye," and you can pick it up via Brille Records and through the band's webstore.

If you've heard Casimer's previous band's EPs ("Oh Honey, We're Ridiculous," "Dear Sir"), the sound is here is similar, with a heavy focus on sunny melody and analog chamber-pop production. You can hear both sides of the single (the b-side is a cover of Elli et Jacno's "Anne Cherchait l'Amour") below.

Vincent included some text explaining the origins of the songs--you might be surprised to hear that the single is inspired by fellow Detroit native Danny Brown. Check out the whole story below...

THE SONGS (notes by Vincent)

o sweet joe pye
With my one-way ticket still in pocket and a juvenile eagerness to "get good at" Chicago, I routinely set out on aimless lone wolf treks exploring neighborhoods one at a time, lurking around record stores, although I owned no record player; lurking outside of rock clubs, although I wasn't yet old enough to get in; lurking around book stores and coffee shops, conceding to hipster stereotypes; and lurking around vintage clothing stores because, well, if I can't get into shows I could at the very least try to look like I play them. Through a pair of cheap earbuds, the soundtrack that accompanied these unabashedly pretentious excursions was predominantly provided by Danny Brown, a once-unknown, mysterious local cult figure enshrouded by superstitious Detroit hip-hop folklore - specifically in rotation was his freshly released LP, 'XXX.'

It was one track in particular, however, that inspired the initial lyrical inklings for "O Sweet Joe Pye." While I fancied the track "Fields" as a gritty window into the deflated soul that lay within the barren expanses of Detroit, my uncle (pka, Casimer Pascal) felt a deeper and more personal connection to it - he grew up on the other side of that window. He was able to recall all too well things like the vast, discolored fields and the ratio of houses vacant-to-occupied in his neighborhood. It was only the ever-expanding grip of weeds that threatened to overtake his home and swallow it whole that provided a young Casimer with a sense of shelter from pervasive urban decay, and the mean kids across the street. This sentiment coupled with the befitting support of a Motown-minded musical cadence, my uncle's despondence of yore is fondly revisited. You let the weeds take over, now it's all over.

anne cherchait l'amour
Before there was Elli et Jacno, there was the Stinky Toys; before there was Casimer&Casimir, there was PAS/CAL. Both entities existed at odds with their respective regional musical orthodoxies. While the Toys introduced debauched & antagonistic punk rock to a population consumed by disco and yé-yé bubblegum, PAS/CAL decanted refined chamber pop into an impure basin replete with Pabst-bellied garage rock clones. Singularity eclipsed by brevity, both outfits disbanded unexpectedly premature. The lads were quick to reposition themselves - musically for both, and geographically for my uncle.

Bogged down by a morass of suburban boredom, and haunted by the sort of trouble it breeds, I followed my dear uncle to the blustery urban behemoth of Chicago. By the time I arrived, bearing just a guitar and some meager savings, Uncle Casimer informed me he'd been working on an English-tongued cover of Elli et Jacno's "anne cherchait l'amour" and invited me to assist him on this quirky little project. It was during these recording sessions (and the dinner parties and boxed wine binges that coincided) where it became evident that the man whom I've long heralded as a genius wasn't too embarrassed to start a band with his undersized, wayward nephew. And like Jacno and Elli before us, "anne cherchait l'amour" commenced our recording as a vested musical duo.