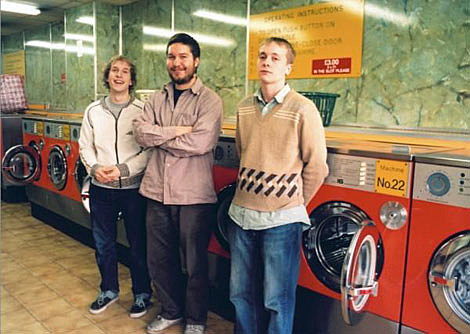 As just mentioned, BrooklynVegan is throwing a pre-SXSW party on March 15th at the Knitting Factory in Brooklyn with three (possibly four) bands on their way to Austin: Let's Wrestle, Casiokids, and The Wave Pictures. Stay tuned for one more band TBA. Tickets are only $8 and on sale now.

Both Casiokids and The Wave Pictures come to us courtesy excellent UK label Moshi Moshi who are finally opening up a U.S. branch that will put out a double-pack of The Wave Pictures last two records (2009's If You Leave it Alone and 2008's Instant Coffee Baby) on April 27. I'm a big, big fan of these guys who were fantastic when they played the Seaport Music Festival last summer and I'm pretty psyched we got them on the bill. Check out their single "Strawberry Cables" (from If You Leave it Alone) which you can download above.

Norway's Casiokids also played that Seaport show and were in NYC right before SXSW last year too, and played a BV day party in Austin last year as well. The Norwegians keep releasing singles (including one of my favorite tracks from last year, "Fot I Hose," which you can download above) with no mention of an album in the works. There is, however, a Norway-only compilation of their recent releases called TOPP STEMNING PÅ LOKAL BAR, which was released today (2/15) and includes a bonus disc of remixes. So be sure to pick that up next time you're in Oslo, and do grab one for me. It includes their brand new single "En Vill Hest" which also only seems to be available in Norway but the video for it is at the bottom of this post. I've referred to them before as Norway's Hot Chip and they bring a similar exuberance to their live shows. Casiokids are actually opening for Hot Chip on their UK tour which starts tonight (dates are below).

Videos and tour dates below....