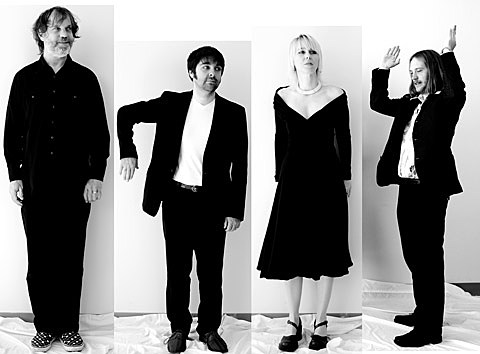 Casper & the Cookies are local legends in Athens, Georgia. Main man Jason NeSmith, who was in of Montreal circa Satanic Panic in the Attic, has been using variations of the Casper moniker for nearly 20 years, and the Cookies have been in existence since 1999. The man knows his way around a hook and puts more good ideas into one song than most folks do on an album.

For example: the band's just-released ninth album, Dingbats, has the feel of a concept album (or rock opera at times) with the frantic dB's/XTC style powerpop they're known for, giving way to contemplative Beach Boys numbers ("White Noise") and other diversions. Its 38 minute running time is crammed with inventive hooks, and while a little disparate, it all pretty much works. You can stream the whole thing below and we've got the premiere of the "White Noise" video, which you can watch below as well.

Casper & the Cookies are on a short East Coast tour and that hits NYC Saturday (4/5) at Cake Shop with fellow pop pop maven Doug Gillard and Lame Drivers. I haven't seem them play since NYC Popfest 2009 but they were a bundle of energy then and a lot of fun.

All dates are listed, along with the video premiere and album stream, below.