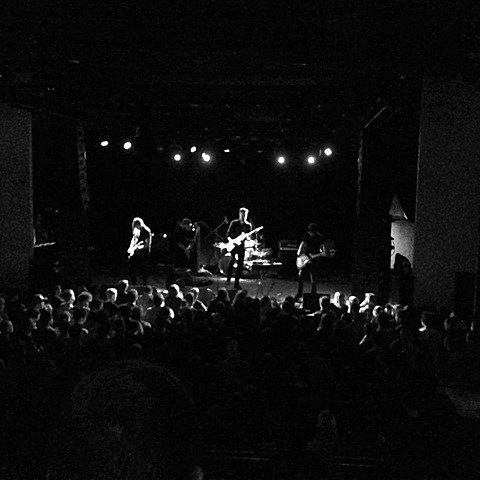 The atmospheric, triple-billed tour that is Caspian, 65daysofstatic, and The World Is A Beautiful Place And I Am No Longer Afraid To Die began in Cambridge this week (11/5), continues in Michigan tonight (11/8), and as discussed, hits NYC on November 24 at Bowery Ballroom. Tickets for the NYC show are still available. Updated dates are listed below.

Caspian are sadly no longer with bassist Chris Friedrich, who passed away earlier this year, but they're still moving forward. In addition to this tour, they're releasing a new EP, Hymn for the Greatest Generation, next week (11/11) via Triple Crown. The EP is short, including only three new songs (plus a demo and two remixes), but you'd seriously be missing out to sleep on this one. The opening title track is one of their most gorgeous songs to date, and I don't know if it's directly related to Chris' death, but it feels like there's a looming sadness here that isn't present on their earlier material. It's one of those instrumental songs that truly speaks louder on its own than any singer could have done for it. Stream the entire EP, along with a video from last Tuesday's Cambridge show, below.

65daysofstatic also falls under the post-rock category, but instead of shimmering guitars, they favor arena-ready synths (it makes sense that they once collaborated with Robert Smith). They just put out a new album, Wild Light, that you can stream via Spotify below.

And while TWIABP are more traditionally an emo band than anything else, they've got enough layering and non-traditional (for rock) instruments to fit in on this tour too. You can stream their album, Whenever, If Ever (out now on Topshelf), below.

Updated dates are listed, along with all streams and video, below...

Caspian - Hymn for the Greatest Generation