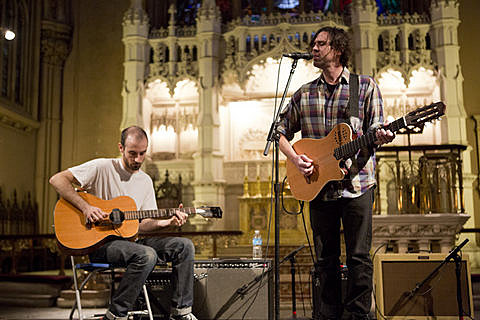 Cass McCombs released the compilation A Folk Set Apart: Rarities, B-Sides & Space Junk, Etc today (12/11). The title tells you what you get but these are not throwaway tracks -- Cass manages to be both prolific and maintain a high batting average. To remind you of its release, there's a video for "I Cannot Lie," one of the more lo-fi psych-garage numbers on the album. It's directed by Malcolm Pullinger and McCombs tells us a little about it:

Alongside its original release on 7 inch in 2003, "I Cannot Lie" appeared in the documentary 'Following Sean' by Ralph Arlyck. I had been a fan of Ralph's work, and my friend Malcolm was working with him on the film and introduced us (I actually wrote some of "Your Mother and Father" on Ralph's piano). This video is an excerpt from 'Following Sean,' slightly reworked. These images from the Bay Area in 1969 still seem relevant today, especially the shots of protesters being beaten by militant police.

Watch the video, and stream A Folk Set Apart via Spotify, below.

As mentioned, Cass is playing a release show for the album at NYC's Bowery Ballroom on January 7 with NYC indie rock supergroup Soldiers of Fortune opening. Tickets are still available.