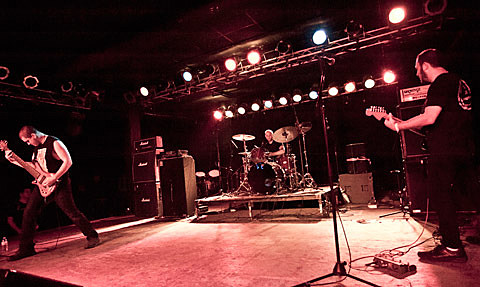 Castevet is no more. There is no single reason or event driving this decision; it is based on the need of each individual involved to continue to develop their vision within new and existing projects. To put it simply, it is time to move on.

Thank you to all who have supported Castevet since our inception in 2006.

Castevet were known for their patient, knotty, and dynamic take on black metal, breaking out with 2010 full-length Mounds of Ash and releasing the well-received follow-up Obsian last year. (Read more of what we wrote about them on IO.) As for the mentioned existing projects, singer/guitarist Andrew Hock is currently in Psalm Zero, who just played a show with Black Anvil. Bassist Nicholas McMaster is splitting his time between Astomatous, Bloody Panda, Geryon, and Krallice. Geryon and Krallice will be a part of the Virus double-date at NYC's Saint Vitus at the end of October.

Streams of Mounds of Ash and Obsian appear below...