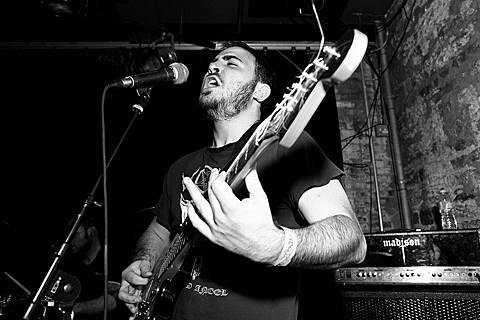 It was bitter cold outside. A starless sky and biting wind provided the perfect setting for a black metal ritual, as soiled snowdrifts hugged the sidewalk and surely made load-in a nightmare for the quartet of bands slated to perform. Those that braved the winter chill and got to the Acheron in time for the first band on 1/14 were richly rewarded.

Falls of Rauros' set unfolded over a series of long, gorgeously-crafted atmospheric black metal compositions. Their sprawling odes to the wilderness and man's primal past recalled the power and delicacy of Drudkh and Agalloch, with a taste of Ulver's Kveldssanger and a hungry intensity all their own. Unfortunately they'd already sold out of CDs by the time they rolled through Brooklyn, but this Maine collective are working on new material for an upcoming release that will undoubtedly surpass even my high expectations.

Louisville, KY's black/doom cult Seidr have long been a favorite of mine, and did not disappoint. The band, which includes Austin Lunn of Panopticon (who we profiled last year), was unafraid to allow beautiful melodies to shine through the thick black fog that envelops their funereal dirges. Their performance was absolutely riveting - total catharsis, and the strongest set of the night.

California black metallers Lake of Blood commanded our attention, and got it. While their imposing frontman roared and raged down on the floor with a whiskey- and blood-drunk crowd, the rest of the band closed their eyes and hammered away, churning out riff after riff of darkness and light. They managed to sound melodic and refined without sacrificing any of the barbarity and speed that keep underground black metal dangerous - impressive, to say the least. Look for a new album from these guys as well.

Castevet still stand out as one of NYC's most engaging live acts, and closed out the evening with a bang. If you haven't seen them yet, you're fucking up. Luckily, they'll be back at the Acheron soon with Phantom Glue and brother band Defeatist - don't miss out. All dates and a video from a previous show at the same venue, below...