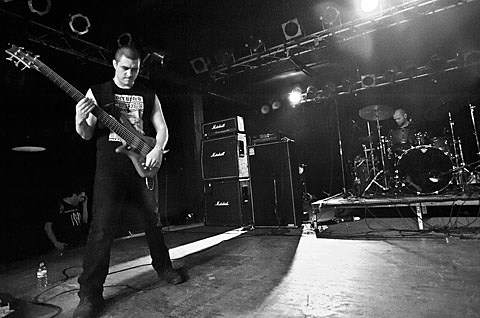 NYC's post black metal wizards Castevet will be playing a few shows before their scheduled appearance at Maryland Death Fest, hitting Montreal, Toronto and NYC before the big deal in Baltimore, where they play the loaded Edison Stage with At the Gates, Taake, and Agalloch, to name a few.

Castevet, which features Psalm Zero's Andrew Hock, will be accompanied by the like-minded Thantifaxath for all dates, and will throw death metal weirdos Pyrrhon (whose Doug Moore is a BV contributor, and who are streaming their new album) and Artificial Brain into the mix for a 5/19 show at Saint Vitus. Tickets are on sale. Try to catch the Wednesday May 14 Toronto stop of the tour if you're in the area--it's a goodie, with headlining performances by Ulcerate and Inter Arma.