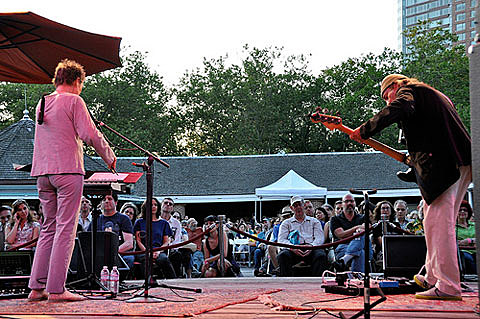 TICKETS AVAILABLE ON A FIRST-COME, FIRST-SERVED BASIS AT THE GATE AT 5PM. DOORS OPEN AT 6PM. THIS VENUE HAS LIMITED SEATING.

Shara Worden is the granddaughter of an Epiphone-strumming traveling evangelist, her father an accomplished accordionist and her mother a classical organist. As a young person, Worden sang in church with her family and competed internationally with her high school chamber choir. She received a BA in Opera from the University of North Texas and studied composition with Padma Newsome. Her band, My Brightest Diamond, has released Bring Me The Workhorse (2006) and A Thousand Shark's Teeth (2008) on Asthmatic Kitty Records. In addition to her own songwriting endeavors (a new album is imminent), she has recently collaborated with myriad artists, including The Decemberists, Sufjan Stevens, David Byrne, Matthew Barney and Sarah Kirkland Snider. On this night she will join forces with a young but sophisticatedly scrappy group of players called yMusic who have backed the likes of Antony and The Johnsons, Arcade Fire, Beth Orton and Spoon to name a few. A night of incredible versatility in a place called home, Shara and her musical wanderers will leave you in a beautiful daze.

Check out the video of The Hold Steady playing the national monument in 2006, below...