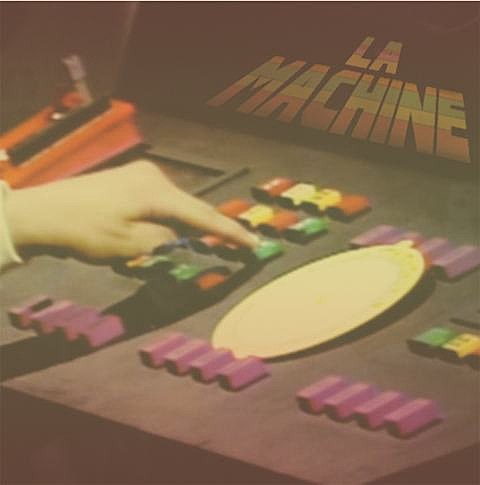 The year was 1996 (a guess really), when I had La Machine play in our Olneyville warehouse space. It was the first time I danced in front of other people. (I was later told I was really good)

I think maybe it was the first time I can recall where I stood in front of something I would consider modern psychedelic music. Not a rehash of some ghost from the past but something new to me.

We had a plethora of hardcore, improv, and noise bands in New England... but this... this was something different. It was churning and it had a haunting floor - scraping ass on it. It had hints of nausea and a cyclic simplicity that to this day I still love and listen to often. Loudly, stoned driving through the desert. Laughing. They played and my friends skated the quarter pipe my flate mate had built... it was my first successful party and I thank La Machine for it.

Late '90s Providence bass-and-drum-and-effects duo La Machine cranked out a lot of CDR albums during their existence but Phases & Repetition never made it past an initial mixdown to cassette. Luckily Thee Oh Sees' John Dwyer convinced main members Rick Pelletier (who was on hiatus from Six Finger Satellite at the time) and John Loper (who would join 6FS in the mid-'00s), to dig it up, dust it off and let his label, Castle Face, put it on vinyl. It's out next week (7/16) but you can hear the album right now, though, which is streaming in full below. You can check out the very trippy video for "Too Bad" below too.