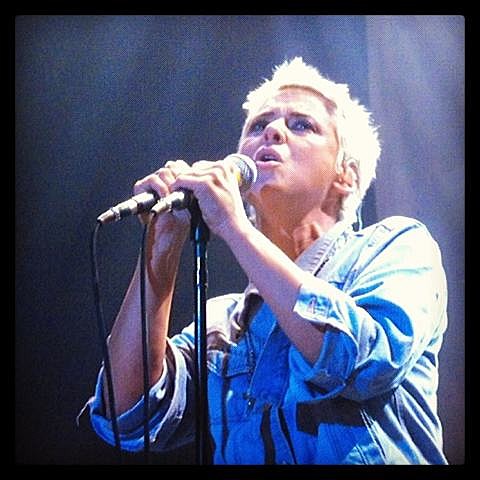 ...the lights went down and Cat Power's backing band wound up with a slight guitar line that seemed to bring Chan Marshall out of the shadows. She had let her Mohawk grow out--no photographs were allowed during the set, so please bear with textual descriptors--but her hair was still short and bleached-blond, with darkly imperious eyebrows that arched over the back of the room. If you've never heard it before (I hadn't), Marshall's voice in person is only slightly less burnished than on record, not necessarily always the magnificent, ineffable thing I had been expecting. It was also difficult to hear contours and nuances due to Sun's stickier beats ("Sun"), vocal distortion ("Silent Machine"), and the simple fact that her voice was often sunk low in the mix ("Cherokee" and "Human Being"). When you could hear it above everything else, however, on older piano-driven cuts like "I Don't Blame You" or "Bully," it rose in her throat raw and untrammeled, transfixing everyone enough to shush themselves. - [Village Voice]

Cat Power's current tour hit Terminal 5 last night and we've got the setlist to the sold-out show below. Also on the bill was rapper Angel Haze, who also appears on a new, Ryan Hemsworth remix of Chan's single "Manhattan" which you can stream below.

Openers for the evening were SISU, the band fronted by Sandra Vu who also plays drums in Dum Dum Girls (Jules Dum DUm is also in the bad). You can catch them Thursday night (1/31) at Glasslands with "duo" versions of Crocodiles and Punks on Mars, as well as a solo set from Cassie Ramone. Tickets are still available.

You can catch Ryan Hemsworth live on his upcoming tour with Daedelus and Salvia.

Cat Power remix and setlist are below...