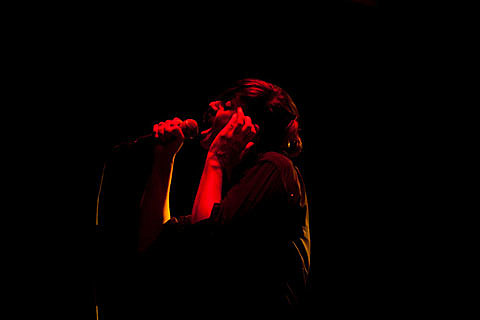 After a string of shows got canceled this weekend, I was glad that there was at least one that was unaffected by Irene: Cat Power. (Chan Marshall's advice for those living in "hurricane city"? "Don't sleep under a window.")

Friday evening's show at Webster Hall, Chan's second in a row at the NYC venue, began not with Xray Eyeballs (Thursday's opener), but the one-woman act, Vorhees. Though her music is relatively unknown, Dana Wachs has been involved in the scene for a number of years both through her job as a sound engineer at DC's club The Black Cat and through her work on the road with artists like Black Dice, MGMT, MIA, and yes, Cat Power.

Perhaps unsurprisingly for a sound engineer, Wachs' music is heavily layered. Still in its beginning stages now, Vorhees dabbles with a number of influences. At its core, it's ambient and droney, but Wachs' chirpy, upbeat vocals recall 80s pop, and her beats bring a little hip-hop flavor.

After playing a handful of original songs, Wachs concluded her short 30-minute set with a Lindsey Buckingham cover and a few words of caution on the weekend's inclement weather.
__

Cat Power's backing band had already begun to play by the time Marshall walked onto the dimly lit stage. After a quick "hello" to the crowd, she grabbed the mic out of the stand and, dragging the chord behind her, retreated farther into the shadows where she kicked off the show with a couple of ballads, including a grim new song about alcohol, sleeping on the streets, and inescapable memories.

As if to draw as little attention to herself as possible, Marshall had dressed in all black, and her long bangs fell over eyes and covered half of her face. Periodically, she pulled at her clothes, clutching at both the collar of her shirt and her neck as if she were uncomfortable in her very skin despite receiving generous accolades from the crowd every few minutes. ("I love you!" "You're so beautiful!" people cried.)

Not one to bask in the spotlight, Marshall awkwardly shuffled back and forth, obviously favoring the far left and right to the center. Though she often had her back to the audience and hardly made eye contact with her praise-shouting fans, her nervous, self-conscious behavior was strangely intimate (in the way that someone who is confiding something extremely personal will rarely look you in the eye). Here was Chan Marshall in all her beautiful vulnerability. Somehow, her deep, smoky voice seemed even heavier and more world-weary live than recorded.

Though the music was largely subdued and melancholic, every few songs, the band let loose, and there were sudden moments of cacophonous instrumentation - electric guitar riffs, crashing drums.

After playing through a string of covers (from Jukebox) and new songs, Marshall closed the first portion of her set with a dramatic extended version of "Greatest," complete with flashing stage lights and a rowdy instrumental segment. She hardly got out the first few words of the song before the crowd interjected wild cheers. As the song stretched to eight minutes, Marshall simply walked off stage as the band continued to play. One by one, her band mates joined her until only a distorted melody remained to be repeatedly looped. The long wait definitely tested the patience of the audience, but no one seemed to move. (At this point, she had only played for about 50 minutes, or eight songs total.)

Finally after nearly fifteen minutes had passed, Marshall and the band returned to play nine additional songs. For the first time of the evening, Marshall joined in on guitar, at least for a couple of songs.

Between the heaviness of the songs themselves and Marshall's apparent unease, it was not the most uplifting show, but she did pick things up toward the end of the set and eventually made an odd request.

"Can you turn on the houselights? Like all of them?" The house obliged, leaving Marshall to sing the last song ("Don't Blame Me") to an audience bathed in bright lights as if born again. Then, after a series of odd bows, waves, and salutes, she walked away, again leaving her band mates to wrap up the song one by one.

So, was there a big breakdown? Well, no, not unless you count Marshall's periodic disappearances from the stage or the lengthy intermission. But despite the relative stability of her performances now, there remains a soul-stirring sadness in her voice and her delivery that in some ways is as difficult to bear as a show addled by an alcohol-induced haze of forgotten lyrics and on-stage crack-ups.

A video and the night's setlist below...