"...I've heard stories of how she (Chan Marshall) occasionally has 'meltdowns' on stage, owing to her incurable stage-fright and insecurity. As it turned out, she played her entire set without anything of the sort, and it was very good. She was just performing solo, and played a lot of songs off the forthcoming album 'The Greatest', in addition to a lot of my favourites, such as 'Good Woman'. Miscellaneous covers rounded out the set, including a lovely medley of 'All I Need to Do Is Dream' and 'Blue Moon', and finishing off with a heart-wrenching version of 'House of the Rising Sun', whose lyrics had been adjusted, clearly in view of the recent tragedy in New Orleans. She segue'd between songs, deliberately, I assume, to prevent people from applauding, which indeed they only did when she switched from guitar to piano or vice versa." [fearful_syzgy] 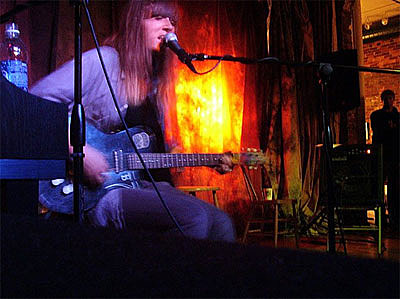 "I really like Cat Power's name, but, other than that, she proved not to be to my taste. Neilson described her as 'dirgelike' and that just about sums it up. So if you like dirges, seek her out. The Blind Boys of Alabama, however, were amazing..." [Red Peonies]