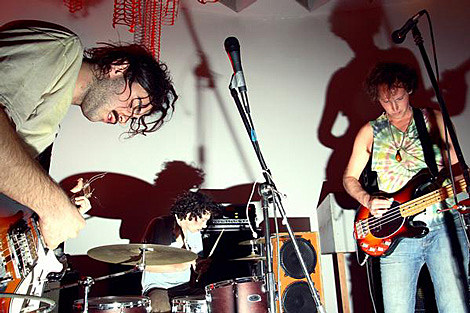 Chicago's Cave and NYC's White Hills will team up for a night of rip-roarin' psychedeli-madness at Brooklyn's Death By Audio on 11/16. The show is one of two lined up for the Cave. The second is an opening slot for Times New Viking at Mercury Lounge on 11/18, the first of three NYC area dates for TNV this month. Tickets are still available.

Cave are touring behind their album Psychic Psummer which was released earlier this year on Important Records. The first pressing sold out, but you can pick up a second press copy here. Important also has a few one minute snippets from the LP here.

White Hills recently dropped a new 12" on Thrill Jockey, Dead, their second release for the label, as Heads On Fire was reissued earlier this year. You can view a video for Dead below. White Hills played Roadburn 2009.

Speaking of Roadburn, the festival added some more high-profile bands to their already outstanding 2010 lineup including Yob, Kylesa, Church of Misery, The Gates of Slumber, Nachtmystium, and many more. The current lineup is below. Tickets go on sale 11/28.

The current Roadburn lineup, Cave tour dates and the White Hills video are below.