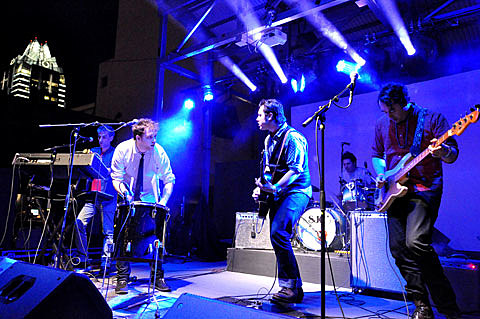 The Brooklyn Museum is hosting the Audiophile Concert Series with one show happening each month in April, May, and June. The series was curated by Shirley Braha of Weird Vibes/NY Noise and is made up of exclusively Brooklyn bands/artists. The first show is Oneohtrix Point Never and Body Language on April 19, then NewVillager and Caveman on May 17, and lastly, Tanlines Lemonade and Small Black on June 21. Tickets for all three shows are on sale now. UPDATE: It says Tanlines on the ticket site, but they're not playing, Lemonade is instead.

Oneohtrix Point Never and Caveman are both playing the Dessner brother-curated Crossing Brooklyn Ferry festival on May 5. Tickets for that day are still on sale.

Meanwhile Oneohtrx opens for Black Dice in Brooklyn this weekend, at a show that just went on sale. He's also on the bill of a show happening at Public Assembly in August.

Some videos from the bands below...