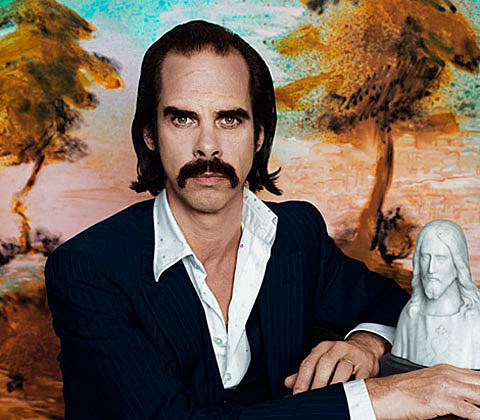 Move over wolves, crystals, girls and bears. Caves are cool now. Following in the footsteps of cave granddaddies Cave-In (who recently reunited to cash in on the cave phenomenon) and Nick Cave, there seems to be a sudden influx of cave bands hitting the scene. Maybe it all really started back in 2007 when Pretty Girls Make Graves broke up and Derek Fudesco formed The Cave Singers (Pretty Girls Make Caves) who were almost immediately signed to Matador which two years later also became the home of Cold Cave. According to Wikipedia, Cold Cave have been a band since 2005, but the dark synthpop group with hardcore roots didn't actually release anything until 2008. Their Matador debut, which really made them a household indie rock name, came in 2009.

Earlier this year, the popular LA all-girl punk band Mika Miko broke up leaving prominent member JennifEr ClAVin without a musical home, but not for long. She quickly joined cave band Cold Cave, thus adding even more credibility to the cave scene. On April 29, 2010 (last night), Cold Cave played a headlining show at Le Poisson Rouge in NYC. How was it? They reportedly played for 35 minutes and it was their third NYC show in less than a week. The first was at Solar One, a free NYU Earth Day concert with HEALTH. The next was up at Barnard in a gym due to rain that forced it inside.

Continuing along with the partial inspiration or this post: Cave and Caves. This one was especially confusing me lately, in part due to the emails I get on behalf of both bands. I had to take a second and confirm in my mind that these were two different groups.

CAVE (I think it's all capital letters) is a psychedelic Chicago rock band with an impressive resume and a bunch of releases dating back to 2006. You may have caught them on their November tour. If not, don't fear, the band have a loaded show schedule this summer that includes the Pitchfork Festival, the Sled Island Festival in Canada, dates with Quintron and Miss Pussycat, and two NYC shows: August 14th at the Studio at Webster Hall and August 15th at Issue Project Room. A new 12" CAVE EP entitled Pure Moods will be released by Drag City in May (though the download seems to be available now). All tour dates below.

Caves (plural) started in San Francisco, but like the Morning Benders, now live in Brooklyn. Like Cave, they also fall into the psychedelic category. And though they are looking for a drummer, they actually have five local shows coming up including a record release party at Cameo tonight (4/30). Said the Gramophone has an MP3. You can listen to more at their SonicBids page. All dates below. 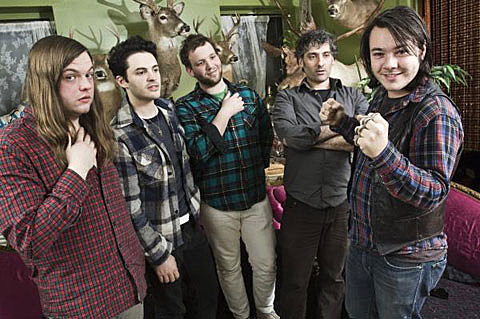 Also tonight, 4/30, in the NYC-area: Caveman are opening for Here We Go Magic at Maxwell's. The four-part harmonizing Brooklyn band (who has opened for Here We Go Magic before) is the new project from Matty Pickles of The Subjects. Other members are Subjects guitarist Jimmy Carbonetti, Jeff Berrall of Elefant, Stefan Marolachakis from The End of the World, and Sam Hopkin. Maybe you caught Caveman at Cameo (or Caveo as some call it) on April 19th. Shannon did:

"I returned to the mystical back room just in time to hear Caveman self-deprecate and be casual and charming, then nonchalantly break into a pretty tight, polished set that would stop you in your tracks on Bedford Avenue if you heard it coming out of a record shop. I mean, check out the song "Decide," on Caveman's Myspace here. They have such a lovely, echoed lo-fi sound. I believe the band is somewhat newly formed. I gather this from something they mentioned in their stage banter and because I have their set list from that night in my purse, and more than one song began with "New Jam # ...," which I find incredibly endearing."

They are new (their first show ever was at Bowery Ballroom with White Rabbits in January), and I agree on the checking out their MySpace recommendation too. There you will find two beautiful songs (demos). "December 28th" is especially Grizzly Bear/Fleet Foxes-esque. If you miss them tonight, they also have a NYC show scheduled on May 19th (at Sway?).

Finally, last but not least, I'll wrap things up with Cave Bears. They, like Cleveland's Clan of the Cave Bear, have successfully combined both caves and bears, but the mind-expanding experimental, and sometimes silly, Massachusetts band has a sound all their own (at least compared to anyone else in this post). No wonder they recently shared a bill (the same night Cavebear played Cameo) at Death By Audio with guitarist and Thurston Moore collaborator Bill Nace, the Thurston Moore approved Fat Worm Of Error, and Darren Mabee's band We are the Seahorses. Video of their wacky live show with everything else, below...