Cayetana in Chicago in June (more by Jeff Ryan) 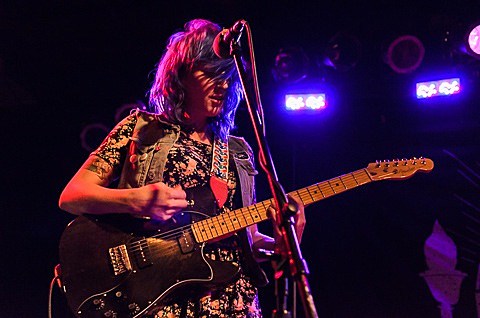 Philly's Cayetana are set to release their debut album, Nervous Like Me, on September 9 via Tiny Engines (pushed back from 8/26), and they'll be playing some release shows the weekend before. Two of those are with Chumped, Spirit of the Beehive and Albondigas, including the NYC show happening September 6 at Saint Vitus. Tickets for that show are on sale now. Besides those release shows, the band only have a few other dates announced, including a Long Island show on September 25 at Amityville Music Hall opening for Laura Stevenson. Tickets for that show are on sale now too. All dates are listed below.

We've already posted "Serious Things Are Stupid" and "Hot Dad Calendar" from Cayetana's debut LP, and since we last spoke two more tracks -- "Scott Get The Van, I'm Moving" and "Dirty Laundry" -- were released. Like the others, these are quality doses of punky indie rock that continue to suggest Nervous Like Me is going to be a very promising debut. Stream all four tracks below.

Meanwhile, speaking of Chumped, you can catch them in their hometown of NYC (at least) two other times before the show with Cayetana. They were recently added as an opener to the Sidekicks / Sundials / Dowsing show at Saint Vitus on August 22 (tickets), and as discussed they play the free Brooklyn Night Bazaar show on September 5 with Modern Baseball, Beach Slang and Crow Bait. Besides that, their only other dates are Riot Fest Chicago and The Fest.

Stream all four Cayetana tracks, with their list of dates, below...