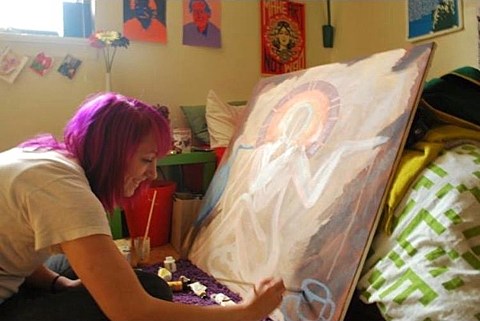 That tour brings the two bands to NYC on April 13 at Music Hall of Williamsburg. Tickets for the MHOW show are on sale now.

UPDATE: A Great Big Pile of Leaves are on that run too as direct support, making for one killer triple bill. AGBPOL are also on board for NJ's Pinelands Music Festival on August 15 with The Early November, You Blew It! (both of whom they're touring Europe with) and more.

That's a picture of Cayetana singer Augusta Koch painting RX Bandit's ...And The Battle Begun album cover above. Check out the full list of tour dates, with videos from both bands, below...