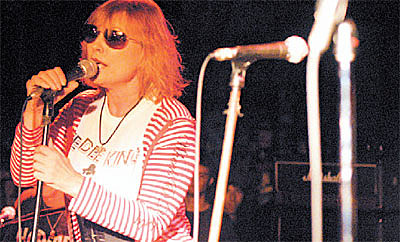 photo from the Metro newspaper

CBGB's lease expires on August 31st (although shows are scheduled through September 10th). The NY Times reports that their landlord wants them out. Last night (August 1st) was the kick-off of the 41 day run of announced benefit shows at the club. According to Steven Van Zandt (not "ZANT" Daily News!), there's also a bigger concert taking place in Washington Square Park on August 31st. (let's hope for Talking Heads, Beastie Boys, Blondie, and the reincarnated Ramones.)

Feedback is rolling in from the August 1st show:
* "On August 1, the first day of the last month of the venue's current lease, Steven Van Zandt, Tommy Ramone, Debbie Harry, Lenny Kaye, Handsome Dick Manitoba, Legs McNeil, Jesse Malin, and a host of other speakers and performers banded together to raise the public's awareness about the very real possibility of the death of CBGB." [SPIN]
* "Little Steven was there, as was Lenny Kaye. Debbie Harry went on (listed as solo acoustic) at 8PM, before anyone in their right mind showed up. Brian Jonestown Massacre got squeezed in and squeezed out. Ted Leo played a set in each room, going on at 12:15AM in the Gallery, and closed with a killer solo version of 'Dancing in the Dark.'" [heartonastick]
* "was SO INCREDIBLY AMAZING. ted leo... holy crap. and all five bands before him were good at worst and really, really good at best." [anonymous]
* "Deborah Harry of Blondie fame commandeered the stage for an impromptu jam session after a news conference yesterday." [Daily News]
* "Ted Leo rocked. It's so bizzare to see him play there so recently after he sold out irving plaza... and it wasn't even crowded." [Yeti Don't Dance]

Wireimage has some small pictures.